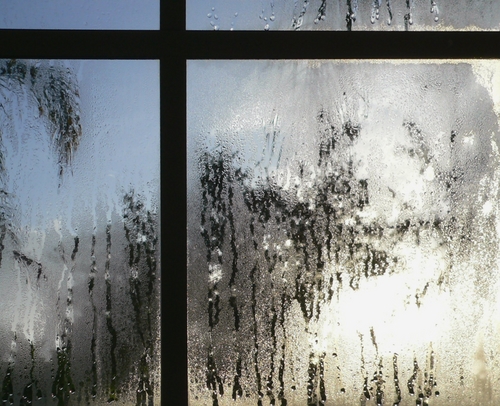 The high Summer temperatures causes the air trapped between the two panes of glass to expand causing the centre of the window unit to swell like a balloon. As the temperature drops the air contracts and the window unit goes into negative deflection causing the glass to contract in the middle. This constant expansion and contraction is called solar pumping. the stress this causes on the perimeter seal eventually causes the window seal to fail.

Moisture/Humidity trapped in the sealed window unit turns into steam that rises to the top of the window.

As the temperature drops, the steam condenses on the cooler glass surface and runs down the glass and accumulates on the bottom spacer ready to be turned back into steam again when the temperature rises.

Other causes of condensation on windows are: